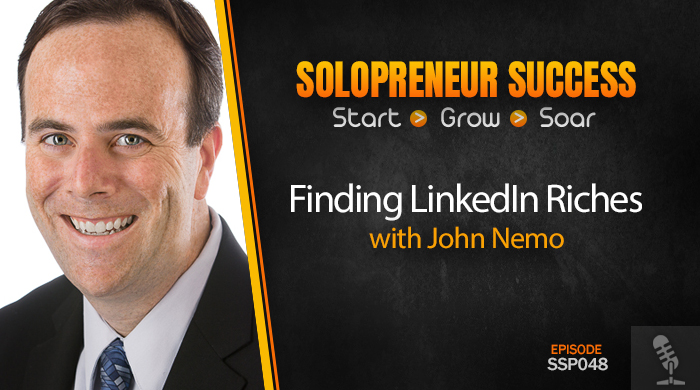 LinkedIn is much more than just a social networking site. John Nemo literally wrote the book on turning LinkedIn into a potent tool to grow your business. John’s LinkedIn advice has featured in Business Insider, Inc. Magazine, and even LinkedIn’s official marketing blog.

In today’s episode, John shares how to build the perfect LinkedIn profile, how to approach prospects, and his method for closing 5-figure deals using his simple, easy-to-use template.

You will hear about:

Kind of the exciting happy part of the story is within the first 90 days of leaving and being on my own, I was able to generate six figures in revenue for myself as a solopreneur, sitting there with my wobbly folding card table on my MacBook Pro finding people on LinkedIn, selling to strangers online.

You’re listening to John Nemo, LinkedIn lead generation specialist and author of LinkedIn Riches. Not only did John quickly build a six-figure business using LinkedIn as his lead generation platform, he’s a leading teacher for those looking to do the same. And you’re about to learn many of his best tips right now, because John is today’s guest on Solopreneur Success.

Hello, solopreneurs. Today, I’m interviewing John Nemo, best-selling author of LinkedIn Riches, and one of the top instructors in the world on building your business and making more money on LinkedIn. By the way of introduction, John’s LinkedIn advice has been featured in Business Insider, Inc. magazine, LinkedIn’s own official marketing blog, along with many other places and, as you’re about to hear from John, he truly knows what he’s talking about. He’s personally rewritten the LinkedIn profiles for many A-list entrepreneurs. I’m not going to give you the whole list, but here’s just a few: Chris Brogan, John Lee Dumas, Mary Smith, Tom Ziglar, Ray Edwards. That’s just starters.

What really excites me about having John on today, and why I asked John to come onto Solopreneur Success™ is how his advice is really down to earth, it’s easy to implement, just plain works at all levels of business, whether you’re starting out or you have an established business, and a big plus, John has already proven this works for solopreneurs, too, as you’re about to hear from his own story in a moment. So, John, welcome to the show.

Thanks for having me, Steve. super excited to be here.

Yeah, I’ve been wanting to do this for like a year now. So glad to get you on. We have a similar background. Well, we both dove headfirst into the entrepreneurial world with limited resources, a family to support, and I read your background story in your book, LinkedIn Riches, and I was like “this really resonates with me.” I kind of have a similar story. But I’m talking about you today so I’d love to love to hear about, for our listeners, what caused you to leave a cushy 6-figure job? Yours is voluntary. I was laid off. To pursue the entrepreneurial life. What led to that?

Thanks for asking. A lot of people listening, a lot of solopreneurs, for a long time, I worked corporate jobs. I was trained as a journalist to work for newspapers, associated press, and then I went into public relations. I worked for trade associations, social media marketing, and things like that. Back in 2012, like a lot of people trapped in corporate jobs, I wasn’t happy. I had an entrepreneurial itch I really wanted to scratch. I really wanted to be out on my own. I wanted to build a business around a lifestyle instead of the other way around. So, unlike you, I did voluntarily leave, but I was crazy. I had one client, I had enough money for 30 days, I had three young boys at home under the age 10, and my wife, who wasn’t working, and I left. I didn’t have a big savings account. I didn’t have any money. I had credit card debt. I mean, I burned all the ships. I just dove in.

A leap of faith.

Yeah, and the story I told myself in order to do it was “you can always go get another corporate job. There’s always going to be another opportunity by then. I have networked enough and knew enough that I could get another job if I had to, if I fell on my face,” but the exciting part of where LinkedIn comes into this is, even though I quit and I only had one client, enough money for 30 days, I did have a plan, and I saw a unique opportunity with LinkedIn, in particular, all the way back in 2012, to really use that platform to build a book of business, to quickly do that.

So, kind of the exciting happy part of the story is within the first 90 days of leaving and being on my own, I was able to generate six figures in revenue for myself as a solopreneur, sitting there with my wobbly folding card table on my MacBook Pro finding people on LinkedIn, selling to strangers online. I didn’t have a travel budget. I wasn’t doing anything. It was just understanding the power of this platform to really scale and sell to your ideal clients anywhere in the world, so that’s kind of the journey and how the leap happened.

Yeah, and I want to point that out – you said six figures in 90 days?

That’s not really heard of too often. What did you think would happen?

My kids at the time called it the money machine, my laptop. Every time I opened it; I’d have a new client. What I was doing, I opened a marketing agency, and I was going for high-end five-figure type deals. It wasn’t like I was selling a $48 product, but I was amazed. I did not expect it to go that well. What I discovered very quickly, and what I’ll share with everyone listening and watching this, it’s a very simple approach. The beautiful thing about LinkedIn is, at a very high level, you go out as the solopreneur using your personal profile, you find the exact person that would be perfect for your services, you build very quickly and scale a one-on-one relationship with rapport and icebreaking, and then you pivot into offering them services.

Once I got the first couple of clients that way, then I’m like “okay, this is really working. I’m going to double down and triple down.” So, it very quickly built. I can share how I did that and how everyone else can replicate the model if you’d like.

Yeah, absolutely. I love like you’re just coming out with a very simple outline, and that’s, like I said, it’s down to earth, which you do, and I have all these questions I want to ask you, and you’re like already getting to it, which is fantastic. Let’s dive right into that. You said before, to me, you said the money is in the mailbox. What does that mean? And then let’s just dive into some of those steps.

Yeah, so it’s a super simple process. There’s just three parts that you need to win business on LinkedIn. Part one is your profile. We’ll talk all about that. Part two is prospecting – finding the leads. Part three is what I call the profits, and that’s engaging people in one-on-one messaging. So, let’s unpack each of the three very quickly and simply. Part one is your profile. That’s the foundation. It’s your LinkedIn personal profile page. Now, the good news about what I’m going to explain to everyone is, you don’t have to worry about company pages. You don’t have to worry about LinkedIn ads. You don’t have to worry about LinkedIn articles, LinkedIn videos, LinkedIn status updates. Throw all that out the window. None of it matters.