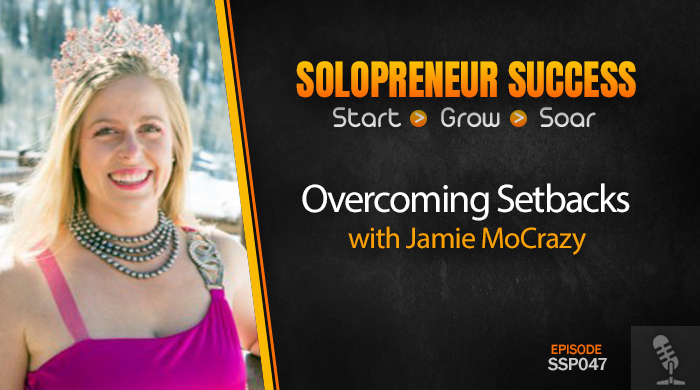 Resilience is the key to success. No one knows that better than Jamie MoCrazy, former X-Games and World Cup Professional Skier whose career came to a grinding halt following a monster accident that had medical crews completing a death report on her while still on the mountain waiting for a medevac.

In today’s episode, Jamie talks about her long journey through recovery, starting her company, MoCrazy Strong, and how she’s using her experience to make a difference in the lives of others.

In this episode you’ll hear about:

You’re listening to former X-Games and World Cup Professional Skier Jamie MoCrazy. Following a massive skiing accident that left her in a coma with a traumatic brain injury, Jamie had to find the resiliency within herself to restart her life and climb what she calls an alternative peak.

The lessons you’ll learn in this conversation will help anyone who has ever faced a setback in business or any other area of life. And you’re about to hear these powerful, hard-learned lessons now because Jamie is today’s guest on Solopreneur Success.

Hello, solopreneurs. Today, I’m bringing on a very special guest, Jamie MoCrazy. She’s a World Cup professional skier who performed amazing feats on the slopes of the Dew Tour, X-Games, and the AFP World Championships, with her whole life in front of her, until everything literally came crashing down. I’m going to let Jamie share her story in a moment rather than share it with you myself, because I want her to give you the amazing experience that she’s had.

It’s a tough experience, but we all go through tough times, and one of the important things I want you to listen for today as we have this conversation is, where in your life are you having challenges and difficulties? Where’s the decision points you need to make about getting back up on your feet and moving forward again? Because the lessons about resiliency you’re about to hear in this conversation are important for everyone. Jamie, welcome to the show. I’m so happy to have you here.

Thank you. I’m happy to be here.

You have an amazing background. You have become very accomplished in the world of skiing, and have become known in other areas as well, now, but can you give us a little bit of a background? Did you always ski since a little girl or what happened there?

That’s a great question. It all has to do with resilience. I started skiing when I was one year old, because skiing was passed down through my family. My grandmother actually was a World Cup downhill champion and my great uncle went to the Olympics twice in skiing, so skiing was part of my family, and now that I became such a good skier, people say “oh, you wanted to start her early,” to my mom and she said “no. I wanted to go out and play with my baby in the way that gives me the most joy, which is on the slopes,” so she would bring me out and put me in between her legs and we would just play.

One of the big tips, in case anyone who’s listening happens be going skiing with kids is, keep it short. Keep it short, like an hour, and give them snacks every time they go up the lift. We just had fun and we went skiing, and then I, also, was a gymnast. I was always very active and adventurous, so when I was nine years old, I actually won state championships in gymnastics, and I won state championships in skiing. When I was interviewed, I said my dream ambition was to combine skiing and gymnastics, and that’s what slopestyle skiing is. It’s flipping and spinning and combining skiing and gymnastics on snow. It just continued to grow, and I was competing, I was traveling, I got on to the professional level in slopestyle and halfpipe skiing, and I was traveling around the world, competing.

To get to that level, that’s where that whole progression actually has to do a lot with resilience, because I can tell you, when you’re learning a new trick, especially a new rail trick, that’s where you slide down the rail and you do little switch ups and tricks on it, you will try that trick for hours and you will fall every time or slide off the rail every single time for hours until you finally get that trick that you’ve been working for, and it feels so good to get that trick. That’s what resilience is about. You just try over and over again. That proved to be a very important thing that I was raised with.

Growing up, my mom, she actually has a master’s in psychology and is a PhD candidate in mind-body medicine, and she’s huge into what we’ll get into in the future, some more things that happen in my life, she was a very big part of. When she was raising me, she taught me how to be my own personal best, and we’ll get back to that in a little bit.

Yeah, we sure will. It’s funny what you’re saying about the tricks and working. I have a 12-year-old and a 16-year-old still at home. I’ve got seven kids, but they’re mostly grown now, and the 12-year-old and 16-year-old, they’re constantly out on our trampoline and doing different tricks. I see them. They’re out there working. They get so excited when they land the backflip or whatever they’re working on, and say “dad, you’ve got to come see this,” so I’ll stop everything, come out and see. It does take a lot of work. The other day, our 12-year-old does a backflip and lands on the top of his head and twists his neck, and hurts his chest, but he just gets up and keeps on going. I said “you take a break for today. You’ll be back at it tomorrow,” because he was kind of dialling out for a little bit there.

It’s interesting that, like you said, your mom encouraged you by making it fun but it wasn’t about “you have to follow my steps.” It’s rather “let’s just have a good time here and let’s enjoy it.” I think it’s really a great lesson for parents, in general is, we don’t have to force our dreams onto our kids. Let them grow and then see the joy in what they do, and maybe they’ll follow our footsteps, or maybe they won’t. I didn’t know you had that big of a family background, actually. You’re third generation in skiing. That’s amazing. So, you also have, as I mentioned in the introduction, a background in competition, and not just you, obviously, before you all the back, to third generation, but how did you get into competition from just enjoying the slopes?

Well, how I got into competition was competing with something I did basically my whole life. I started competing in gymnastics when I was about five, and when I was at the same age, about five, I was doing these Mighty Mite Ski Programs. Every weekend, we get, the kids, we get together, and we were on a team, and we’d have relaxed, but fun, races and competitions. Actually, a story is, we had a competition one day to see who could get the most runs on the mountain, so we were on this lift to see who could get the most runs. It was one of the old little New Hampshire lifts, it was a double. The lift stopped, and I was right near the top, so it was about, maybe, 10 feet over the snow.

It wasn’t super high up. Some people who have gone to the 8-packs that are 50 feet in the air, so this is a two-pack that was 10 feet in the air, but it stopped, and I didn’t want to sit there, so I jumped off the chairlift into the snow. I just jumped off the chairlift and skied down. My mom was actually one of the moms who was working at it, and I skied down, and I got my check mark, and I got back on the lift and went back up again, and then the coaches came down, like “Oh, my gosh. What happened to Jamie? Where is Jamie?” And my mom’s like “well, she’s back on the lift. She’s somewhere out there. Why, what happened?” and they’re like “well, because your daughter didn’t want to wait for the stop lift so she jumped off the lift.”