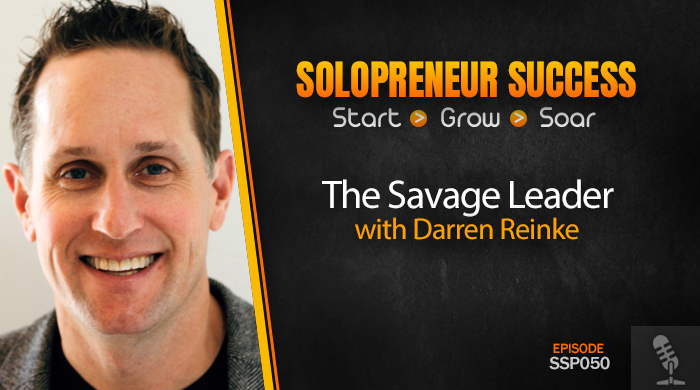 Even the most successful people have self-limiting beliefs. Darren Reinke has spent years coaching and training entrepreneurs and CEOs to overcome these beliefs to become great leaders.

In today’s episode, Darren talks about the balancing act between your values and passions, and how you can get into the mindset of becoming a Savage Leader.

• What you should consider before taking on a partnership.
• Why it’s important to balance your passions and your values.
• How to overcome any self-limiting beliefs.
• The value of reaching out and finding mentors.

What Color Is Your Parachute Book

And I believe there’s this false impression that most successful people, whether they’re entrepreneurs or professional athletes, or entertainers, or people in your community or your past, or whatnot, are just these superhuman beings, but we all have them. I learned, through interviewing people for the book, but also just talking with people, clients, and successful tech entrepreneurs, who at first had impostor syndrome, and I do a lot of volunteer work with the Navy SEAL and the special OPS communities, and they have these big self-limiting beliefs, about “I don’t have the right experience,” and it’s like “you absolutely do. You led these teams and situations that had no safety net.”

Hey Solopreneurs, it’s Steve Coombes here with episode 50 of the Solopreneur Success podcast. You just heard a clip from my recent conversation with Darren Reink, Founder of executive coaching and training company Group Sixty and Executive Coach to CEOs through the CEO Forum at UCLA Anderson.

Now Darren will be the guest trainer for the February 2022 live training inside my Solopreneur Success Connections community. If you’d like a free ticket to attend that training via Zoom, keep listening past the outro music following the interview to hear all the details. In fact, always listen past the outro music because I regularly share upcoming events and freebies you won’t want to miss out on in that post-outro music segment of the podcast.

Now in the chat Darren and I recorded for this episode, we talk a lot about an incredibly common challenge among solopreneurs: how to overcome self-limiting beliefs. And you’re about to benefit from that conversation right now, because Darren is today’s guest on Solopreneur Success.

Hello, solopreneurs. Today I’m interviewing Darren Reinke, Founder of Group 60, an executive coaching and training company focused on great leaders from the inside out. Group 60 works with leaders and teams at fortune 500s, midmarket companies, fast growing startups, and visionary non-profits. He’s also the author of The Savage Leader, which is a new book I’ve been reading recently that provides 13 principles for becoming a great leader. It’s a book I do recommend for you to read. You also have some great side tools you can download that are associated with a book, so I’m really looking forward to this conversation today. Darren, welcome to show.

Great to be here.

Sure. If you don’t mind me going back a little further in time. A bit of a unique background, or at least I think it’s a bit of a unique background, my parents are both veterinarians, so for me, my worldview is really around Health Science. Growing up as a kid, I knew what it meant to be a veterinarian, to be a physician, to be a dentist. I knew about all those arrays of jobs. I really just didn’t have a good sense for the work world beyond that, so as I went through high school, and halfway through college, I wanted to become an orthopaedic surgeon. My sister is actually what I would call a human dermatologist, which people will look at me strange because my mom is actually a veterinary dermatologist, and my plan was to play that same trend forward to become a “human orthopaedic surgeon,” like my dad, who’s a veterinarian orthopaedic surgeon.

So, I went about halfway through college, just realized that Med school wasn’t for me. That path wasn’t the right thing for me, and I got inspired and intrigued by some business classes during my undergrad at UC Davis. As I mentioned, about halfway, I talked to my best friend growing up on the streets, his dad was an executive for a very large bank, and I was just “I just don’t think I want to go into health science, just interested in business.” He says, “well, take a look at investment banking and consulting and that’ll give you a best way to actually experience business and get a sense for different industries, different functions, different marketplaces, and so forth.”

So, I ended up landing a job at Accenture, what was Anderson consulting at the time in San Francisco, and at that point in my career, I was thinking “okay, I want to be a Fortune 500 CEO,” which obviously, I was clearly deluded because that stuff went off the path, immense amounts of pressure, and a lack of work-life balance, but at that time that’s more or less the path I saw in front of me. I ended up going into Business School because I figured “I’ve got a great four-year experience at Accenture, I learned a lot, but I don’t really know what’s next, but I do know that I need a greater business foundation, so in finance, accounting, and marketing, etc. So, did my MBA at UC Berkeley, and that just led me to the next stop, which was to get passionate about consumer brands, so I did an internship at Neutrogena. It’s a subsidiary of Johnson and Johnson, and then end up working a lot in that field.

I worked for GAP corporate, and over time, it was interesting, as I was walking the halls of GAP, I said “what is it that feels the same as when I was walking the halls of Accenture and all the different client sets that I worked on?” For me, it was just this sense of large corporations and layers of bureaucracy. I remember just having some great ideas, that just by the time they got through my boss and their boss, and their bosses, the idea wasn’t even the same as what it started as, so I lost a lot of the passion working in that Fortune 500 context. So, I, at the same time, started to get intrigued by this concept of entrepreneurship. We were living in Los Angeles at the time, and one of my good high school friends, we were surfing almost every day and we got out in the ocean, he was working for a very large corporate law firm doing M&A types of deals, and I was working doing consulting.

We thought there’s got to be a better way. We have just horrible work-life balance, the type of work that we’re doing is not particularly intriguing, and so ventured into starting a surf travel company in the South of Brazil, because that was one of my first forays into entrepreneurship.

So, I have to ask you, what led to Brazil specifically?

Brazil, a couple of things. He took off from his company, Sullivan and Cromwell, and worked for a firm in Rio de Janeiro, thinking “I’m going to have a much better lifestyle.” I think it was a little bit better lifestyle, but still a law firm is a law firm, globally, at least in most cases. So, he had a taste of Brazil. At the time, everything was just shining towards Brazil. The economy was just really booming, everything was cool, the Havaianas sandals were big, a lot of famous professional athletes, a lot of surfers, so Brazil was really on the come up. Also, surfing, at the same time was really blowing up through a lot of the movies, like soul surfer and things like that, so we combined those couple of factors, which was just everything leaning towards Brazil, surfing being on the rise, so that was the reason why we wanted to launch in Brazil.