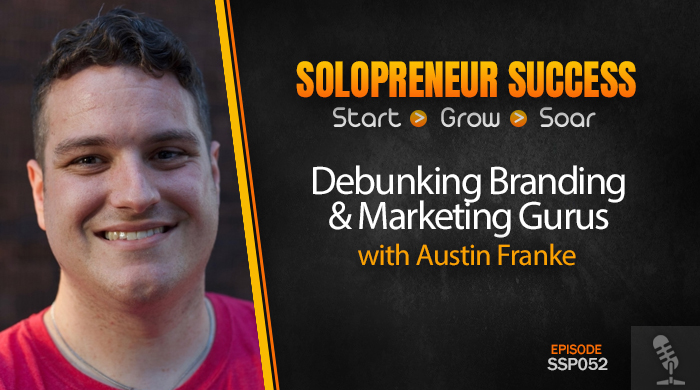 Branding is a big topic with many gurus claiming to have all the answers on how to do it right. Austin Franke, founder of WooPunch, says those gurus are wrong, and he has the data to prove it.

In this episode, Austin shares his contrarian views on branding, marketing, business growth, social media, and why listening to your favorite guru might cost you your business.

Listen now to learn:
• How you can build a brand that changes your customers’ brain pathways.
• Why customer loyalty is not the way to keep your brand alive.
• How to prioritize relationships in your business.
• Why social media isn’t helping you grow your business.
• Why the customer persona is a terrible business practice.

In 60 years of research, not one single company has ever grown through prioritizing customer loyalty, and that really just changed everything for me, and I just leaned in the exact opposite direction because that’s what the evidence was suggesting, and I’ve never looked back.

You’re listening to branding and behavioral specialist Austin Franke, founder of branding firm WooPunch. And yes, you heard him right – he believes the research proves not a single company has ever grown by prioritizing customer loyalty. And that’s just one of many market-contrarian ideas he brings to this interview. Austin also tackles the use of customer personas, social media marketing and more. So if you’re a fan of evidence-backed contrarian viewpoints, you’re in for a real treat right now because Austin is today’s guest on Solopreneur Success.

Hello, solopreneurs. Today, I’m interviewing Austin Franke, branding and behavioral specialist, and founder of WooPunch. First had a conversation with Austin a little over a month ago and I was really intrigued by his contrarian approach to branding. In other words, it’s contrarian compared to what you’re hearing a lot of noise in the marketplace and some pretty big names and gurus out there saying different things that Austin says just ain’t so. So, I invited him on to Solopreneur Success™ to talk about it. I think it’s fun to have a different perspective, and from my original conversation with Austin, it’s got a lot of data to back it up, so let’s get started. Austin, welcome to the show.

Thank you for having me.

Yeah, this is going to be a fun conversation, I know. So, just so our listeners know, can you tell us a little bit about your background. What are you doing out there in the marketplace? What does this mean for the listeners? Branding. It’s big topic and some people think it’s logos and colours, and slogan. I’m sure it includes those things but what is it that you do in the marketplace?

Yeah. I am a brand builder. Branding is a very strange term that’s just meant a lot of things, and I don’t really know if it has a great definition, so I call it brand building, which is essentially just the process of building a memory structure in customers’ minds over time, or a series of memory structures. What that really means is, making sure that you look and sound unique, and that over time, as you’re consistent with your advertising and you’re consistent with your image, and you keep advertising consistently over time, then what happens is, customers start to remember you, they start to build memory structures, and you essentially create a pathway to their brain that compete with other pathways that other brands have also created.

So really, what I do is essentially help companies to come up with the foundation for their brand and then also to give and offer ongoing support for their brand moving forward. The other piece of what I do is really helping entrepreneurs, business owners to understand and get a feel for what is the long-term good of their company, themselves as a founder or business owner, their employees, and their customers, and identifying what that is, and then helping them to work on their culture to make sure that business is not the end but rather a means to an end, and that they have a real focus on their families outside of, or their personal lives that they don’t have a family, outside of work.

Yeah, I love that part of it, too, because we don’t do business because we want to be away from our family or kids, or whatever. I used to do corporate gigs with the cubicle farms and I’m not going back to that road ever. I’m just curious, if you can tell a little bit more about your path. Why this whole idea of brand building, though? What makes you choose this specifically? People often say, “I would love to have my own business but I’m not really sure what to do” and a lot of listeners are like “I want to have that lifestyle of freedom and flexibility but what in the world am I going to offer the world?” So, why that particular direction? We’ll get into some specifics on branding later, but I want to know about your story and how you got into this.

Yeah. I guess it starts with right out of college, I worked for a Catholic non-profit for about 8 years, and for a large portion of that time, my job was essentially to consult ministries across the country on a vision for the future and then keeping them and course correcting them along the way to really give them the tools and equip them, inform them to move in that direction, and then towards the end of my time at the non-profit, we started doing a lot of online resources. I had a film background. That’s what I studied in college, so I started to produce a lot of the videos, promotional and instructional videos, for the organization. I eventually produced all of them virtually, and then even started to learn graphic design and got really interested in that and started designing the materials for the organization.

Towards the very end, I started to design brands for new products that we were releasing and that became really interesting to me and essentially became the most interesting thing to me, so I leaned into design. Then, I came across a lot of people that were saying “great, you’re a designer, but if you really want to make money, you’ve got to be a strategist.” What I ended up seeing was a lot of these gurus, as I called them, saying “branding is more than a logo. It’s more than a slogan. It’s more than this. It’s more than that. It’s so much deeper. It’s so much more personal,” and I really leaned very heavily into that, and eventually decided to quit my non-profit and start my own company and was all about essentially building relationships with customers and helping them to fall in love with your company or your product by making it as personal as possible, and I really leaned heavily in that direction until I came across a series of books that started to place branding into a behavioral science perspective.

So, I really leaned into that direction, learning as much as I could. I didn’t have many clients coming in, so I had a lot of time to learn, which was really helpful, so I started learning as much as I could about behavioral science, and everything that I was reading was saying that brands most likely don’t work that way in people’s brains. They don’t have relationships with brands. Brands are largely unconscious memory structures that are built over time and customers really don’t care about brands in the long run. They want a product to solve their problem, whatever it might be. They don’t really typically want much more than that, at least that’s what the behavioral science research that I was reading was suggesting.

Then, I eventually came across a marketing effectiveness research institute called The Ehrenberg-Bass Institute through the leader of the institute, Byron Sharp, who was essentially a protege of the original founder of the institute, Andrew Ehrenberg. Essentially, what he did is, he took the largest brands in the world, smaller brands as well, compared them and looked for patterns to see how they grew, and what he found was exactly in line with what I was reading about behavioral science completely, which again was affirming that customers do not care about brands and that really, the goal to brand growth is to subconsciously build memory structures and potential customers’ brains, and they may see and ad one year and not buy your product for another three, but the goal really to build a brand is to consistently get new buyers to buy once or rarely, and rare buyers to buy just a tiny bit more often, and that’s how every single brand has ever grown.

It has not been through customer loyalty. It has not been through brand relationships. It has been through market penetration, which is essentially just getting new customers to buy and rare customers to buy a little bit more often, and there is a lot of data to support this. In 60 years of research, not one single company has ever grown through prioritizing customer loyalty, and that really just changed everything for me, and I just leaned in the exact opposite direction because that’s what the evidence was suggesting, and I’ve never looked back.

That’s absolutely a contrarian statement there right. We hear that so often, and I’ve heard it on the show. I believe there is perhaps some merit, at least I think, to customer loyalty because that’s how you get them to buy again. Like you said, it’s not the branding. It’s interesting what you said, because branding to you is not “I love this logo. I’m going to go buy your product.” That’s never going to happen. Are you solving a problem in the best way that the customer believes that you’re going to be able to solve that problem better than anybody else at the price point that they want to pay for that solution? That totally makes sense, but in the aspect of branding, as you’re talking about it, it sounds like you’re saying that it’s an incremental increase over a sustained period in purchasing from existing customers. So, what role would branding have in getting new customers, if that’s the case?